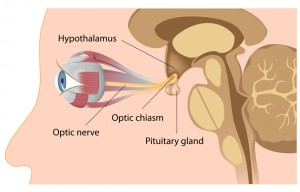 Glaucoma is a term applied to a group of eye diseases that cause a characteristic and recognizable deterioration of the optic nerve with associated loss of visual function. The optic nerve carries visual information from the eye to the brain, much like the cable from a computer screen to the computer. In the brain, the information gathered by the eyes is assembled into a visual image that we recognize as sight.

However, the above definition can easily be demonstrated as “simple” by two examples. First, there are some individuals who have “normal” pressures (usually defined as below 21 mmHg) who develop typical glaucomatous damage of the optic nerve head, characteristic visual field defects, and subsequent loss of vision. Conversely, there are other people with significant elevation in intraocular pressure who sustains no optic nerve damage, even after a protracted period of time. Thus, glaucoma defies a simple explanation and while elevated intraocular pressure is one of the primary risk factors, its presence or absence does not define whether a patient has glaucoma.

When the optic nerve is damaged or injured, transmission of visual information from the eye to the brain is limited, and hence the visual image is impaired. Fortunately, ophthalmologists can usually detect glaucomatous optic nerve damage before there is noticeable vision loss by examining the back of the eye. Often, damage to the nerve can be detected before there is a change in vision by specialized tests.

Many different eye disorders can cause high eye pressure. After measuring the eye pressure, your ophthalmologist attempts to determine the cause of the elevation. It is believed that some form of "clogging" or blockage of the drainage of fluid within the eye (aqueous humor) causes increased eye pressure. Since the eye continually produces aqueous humor, obstruction of its drainage causes the eye pressure to increase. Nearly any eye disorder associated with aging, inflammation, bleeding, injury, tumors, or even birth defects can raise the eye pressure. However, in most cases of glaucoma, examination reveals a normal appearing drainage system and no specific eye abnormalities are found. These patients are described as having “primary open-angle glaucoma.” In other cases, various abnormalities cause a partial or complete blockage of the drainage system. In closed-angle glaucoma, the drainage system is blocked instead of just being clogged. At least fifty different mechanisms have been described that can raise the eye pressure but all produce similar damage of the optic nerve. For more information about some of these mechanisms, see Types of Glaucoma.

Ongoing assessment of glaucoma depends upon regular examination of the optic nerve, checking intraocular pressure, and specialized testing. The well informed glaucoma patient asks not "What is my eye pressure, doctor?" but rather, "How is my optic nerve?"

Damage to the nerve fibers of retinal ganglion cells is the most important sequellae of glaucomatous disease and is manifest clinically by alterations in the appearance of the optic disc. The pathogenic mechanism(s) by which an abnormality of intraocular pressure eventually results in retinal nerve fiber degeneration is a matter of intense debate. Histopathologic examination of the damaged optic nerve head reveals not only axonal degeneration of retinal ganglion cells but also loss of astroglial support tissue, reduction in disc vascularity, and collapse of the lamina cribrosa. Primary vascular, mechanical, and glial theories have all been suggested. Regardless of its etiology, there is a rather typical sequence of change that occurs to the optic disc in uncontrolled glaucoma.

For more information, contact us at Glaucoma Associates of Texas to find an eye doctor (ophthalmologist) specializing in diagnosis and treatment of glaucoma.

Glaucoma Associates of Texas (GAT) would like to welcome you to our new GAT Sherman Office located in Sherman, Texas. We are excited to announce that this is our fifth office in the Dallas-Fort Worth metropolitan area. Our goal is to bring glaucoma specialists closer to your area.

The doctors at Glaucoma Associates of Texas (GAT) are ophthalmologists specializing in the medical, laser, and surgical treatment of glaucoma and cataracts. Each of our physicians has completed a clinical glaucoma fellowship, gaining extensive … END_OF_DOCUMENT_TOKEN_TO_BE_REPLACED

Welcome to the Glaucoma Photo Gallery and Video Gallery for Glaucoma Associates of Texas! Glaucoma Video Gallery In our first video, Dr. Davinder Grover is interviewed by Cheryl Guttman Krader of Ophthalmology Times. The article about GATT … END_OF_DOCUMENT_TOKEN_TO_BE_REPLACED